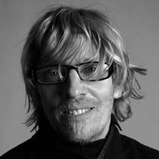 Christopher Makos is an American artist, photographer, and author. A prominent figure in the New York downtown art scene of the 1970s and 1980s, Makos befriended and created unforgettable portraits of the likes of Andy Warhol, Roy Lichtenstein, Patti Smith, and Keith Haring. Born in Lowell, Massachusetts, Makos grew up in California, and moved to New York after high school. He studied architecture in Paris and briefly worked as an apprentice to Man Ray. Andy Warhol, Makos' good friend and frequent portrait subject, called Makos "the most modern photographer in America."
Makos and Warhol’s worlds collided in 1976. Andy was intrigued by Makos’s use of the 35mm camera and his ability to compose a shot. Makos, for his part, became close friends with Warhol, and introduced him to the work of Jean-Michel Basquiat and Keith Haring. As part of Warhol’s inner circle he accompanied the artist on his travels and social outings and has one of the most cohesive collections of photographs of Andy Warhol today. After more than 10 years of intimate friendship and frequent collaboration their photographic work began to overlap and they often influenced each other up until Warhol’s untimely death in 1987.
Since that time, Makos, whose photographs have been exhibited in galleries and museums such as the Guggenheim Museum in Bilbao, the Tate Modern in London, the Whitney Museum of American Art in New York, the IVAM in Valencia (Spain) and the Reina Sofia Museum in Madridare, has been involved with numerous books that reflect on Warhol’s life including Andy Warhol’s Exposures (Andy Warhol Books 1979), Andy, (Assouline 2001), Warhol/Makos In Context (PowerHouse Books 2007), and Andy Warhol in China: The Photographs of Christopher Makos (Blue Kingfisher, 2008), and Warhol: A Personal Photographic Memoir (Virgin Books 1988).
Makos continues to live and work in New York, NY.