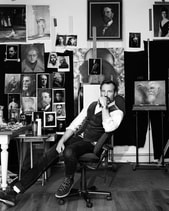 ​Rainer Andreesen was born in 1963 and raised on a remote island on the north west coast of Canada. His obsession with drawing and the love of old master paintings from Rembrandt to John Singer Sargent led him to further his education in the arts.
After graduating from a four year intensive art program from Capilano University in Vancouver, Andreesen spent six years in the advertising world creating corporate design and illustrations. He was then scouted to model in Italy.  While modeling all over Europe for three years, he continued to sketch and paint inspirations from his travels. New York was the next stop for Rainer in 1994 and since then he has continued a successful career in modeling and painting commissions for the likes of Kathy Bates, JJ. Abrams, Martin Short , Alfred Molina and Jennifer Garner.
Portrait painting has always been a fascination for Andreesen, and he strives to capture the humanity and soul of his subjects while letting the viewer create their own story behind his images.