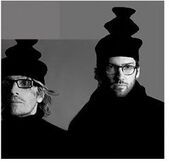 The Hilton Brothers, as an artistic identity, comes out of a series of collaborations Christopher Makos and Paul Solberg began while traveling some seven years ago. Finding that they were both drawn to similar subject matter when they were out in a foreign, beautiful location, they began to shoot the same subjects, almost as a joke. Back in the studio, looking at the printed results it was fascinating for them to see where their sensibilities merged and diverged. The idea of identity, who took which picture, and why was the difference discernable led them to begin a series of diptychs, where they would photograph separate objects and bring them together in one print: one plus one equals a third new artwork. So it seemed with their artistic identities, a blurring of individual egos to proceed to explore other collaborative projects. Makos and Solberg began calling their collective works, and themselves the Hilton Brothers.