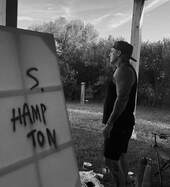 Justin Lyons credits his introduction into the world of “street art” as “the spark” that led him to pursue his own form of artistic expression. It was during a late- night wheatpasting foray when Lyons “realized art didn't have to be limited to museums or to the stark-white walls of galleries. I discovered that art could also find its way into the urban landscape and still be powerful.” Producing art that was raw, expressive, loose, and risky, provided an outlet for his creative impulses.
Inspired by the lives and work of Cy Twombly, Barry McGee, and Jean-Michel Basquiat, Lyons refined his process and worked to develop a style all his own which is both thought- provoked and thought-provoking. This maturation allowed the artist the foundation he needed to expand his audience beyond the streets.
​By 2012, Justin’s art had been celebrated and awarded in venues and exhibitions beyond the urban landscape.  A growing interest and appreciation for his art by collectors and galleries alike continues to inspire and fuel his passion for painting.
​Today, Lyons’s mediums include wood, acrylic, house paint, spray paint, oil stick, epoxy resin and pencil. His inspirations are most often triggered by a word, phrase or thought, which in association with the other elements within the work, intend to try and tell a story without giving away too much, letting the viewer interpret his own connection to the piece.